Fixing a warp sequence error on the loom

Hello,
I warped my Baby Wolf for the Ocean towels and I've woven two towels already. They look good except for a small segment of the Turquoise-Limette (T-L)warp in the center. Coming off the cross, there are about 11 pairs of T-L threads that are wrong. In some cases, they ended up L-T instead of T-L and in other one other place, they are TTTLL. I thought it wouldn't bother me, but it does, so I want to fix it. I searched the forums and found Season 2, Episode 2, Lesson 3 - Changing the Red Zinger. I think I have enough yarn to do this, especially since I don't need the full 9.5 yards for the replacement threads. I would be changing a span 22 threads at about 8 yards each. I think I even have two empty cones. I'll definitely have to watch the technique part of the lesson a couple more times and take detailed notes.

Is there another way that would work or is the "Zinger Changer" technique the best way to go?

Could you have switched those colours as you were threading? Did you wind those two co.ours together? Can you see where the two colours started winding as a pair, if that’s what you did. If so - you could carefully - one by one - switch those threads in their heddles. My guess is that if you rethread that section T-L starting in the direction of your original threading, you might be able to get them back into their right sequence without threads crossing over each other as they come from the back beam to the front beam. It might be worth trying to see if you can fix it this way first. If it doesn’t work - then you can make your mini warp and going the route you suggested. Keep us posted!

Hi Sandra,
The short answers are yes, I wound the two colors as a pair. It was my first attempt at winding two colors and it didn't go very well. There were all kinds of problems, the impact of which I didn't fully understand until I started weaving. I thought I could write-off the sequence error as a "design element," but it's bugging me and I want to fix it. Knowing how to do so seems like a skill I'll need in the future.

I inventoried the section with the mistakes. Going from right-to-left (direction of the threading) the first pair is correct. Pairs 2, 3, 4, 5, and 10 are reversed. It looks like all are correct coming over the back beam. I'm hopeful that fixing pair 2 will make pair 3 okay and likewise pairs 4 and 5. I plan to finish one pair before starting the next pair to take advantage of the likelihood that a fix to one pair will "fix" the pair next to it.

Planned procedure:
1. Prep:
a. Weave a little extra separator space between the finished towels and the area where I'm going to make the fix.
b. Tie a piece of contrasting thread across the top of the reed dent that has the first thread that needs to be fixed so I can locate it easily.
2. Cut the two threads for the first pair (pair #2).
3. Do a "broken warp thread" fix to each of the threads (I need to review the video and my notes first!), then re-thread the heddles and reed.
4. Check my work from the front of the loom before proceeding to the next pair.
5. Determine if the next pair needs to be fixed.
a. If it's OK, check the following pair.
b. If it's not OK, fix it.
6. Continue until all five pairs are in the correct color sequence and the warp is once again ready for weaving.

Does that sound reasonable?

Before I jump into making the changes, I'm going to weave an extra couple inches of separator between the second towel and where I start the fixes.

It sounds like you have thought it out thoroughly. You’ll certainly will have mastered the “broken warp thread” scenario by the time you’ve finished. And, you will have saved more of your warp than cutting off the two towels, fixing and tying on again which I would probably do. It’s for times like this, when my mind goes on vacation, that I always add a bit of a buffer to the warps I plan. I’m looking forward to see how it all works out. Keep me posted!

Oops,
Sorry about the sentences at the bottom. I didn't delete the original text.
My fallback plan is:
1. Advance the warp to loosen the tension
2. Cut the two towels off
3. Secure the the warp threads so they don't slide out of the reed
4. Fix the mistakes and check all of the threads carefully.
5. .Tie on to the apron rod.

I like your idea of adding buffer to the warp. Knowing that I make mistakes, that's a practice I'll adopt! Having some extra warp at the end of a run for experimenting will be a good reward.

I'm going to go to the co-op and get some groceries and mull over the two options.

As always, thank you so much for your help!

I've taken way too long to reply about the fix I made.

I tried to do the "broken warp thread" fix first. It was getting way too complicated because I couldn't just fix one or two threads; I needed to fix the span from the first error to the last error. The boo-boo was in a two-thread sequence (Limette-Turquoise). As soon as I cut the first thread, I realized that I was going to have to do the whole span.

My initial was to cut off the two towels, re-thread the sequence with the errors, and then get on with it. But I thought that was cheating. So that's when I came up with the the idea that I should do the broken warp fix. Your response that you would probably cut off the two towels was incredibly liberating . There was no need to punish myself for making an error.

I cut off the two towels with the error; fixed the warping error, which took about 5 minutes at most; tied back on; and started weaving. I finished the weaving fairly quickly. Hemmed the towels. Put one set in the mail and gave neighbors the other two sets. Everyone loved them. And, I must say, they are beautiful. I kept the ones with the warping error for myself and I love them. Even the error doesn't look look so bad now.

Sandra, thank you so much for your help. It not only helped me with the weaving, but your comment also guided me to being a little kinder to myself.

Here's a picture of the towels (if I did the upload correctly): 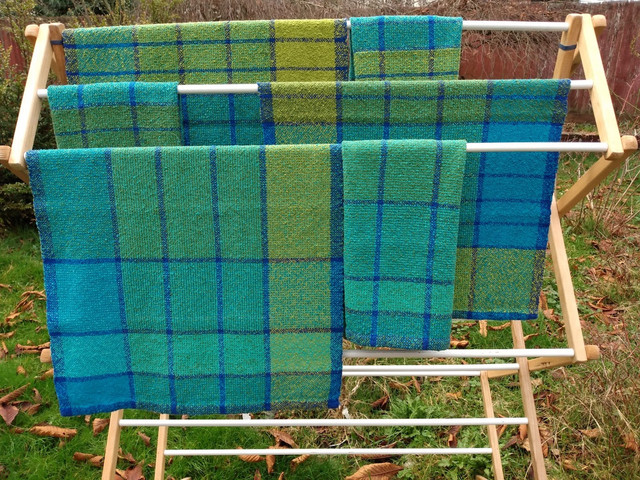 They are beautiful, Cynthia and I love those colours. Thanks for letting us know how everything turned out and Well Done! If there is one thing I’ve learned in my weaving life, it’s when to quit! Cotton tea towels are very forgiving to practice weaving skills on and the $ investment in learning those lessons is small. Keep us posted on your progress as you dive deeper into the weaving rabbit hole 😉

It's a rabbit hole I love! Life has interfered with weaving a bit lately. I hope to get back to it in earnest after next week.