sample 11. What does Jane mean when she says I am using the HUCK Tie-UPs?
Did she rethread the heddles? Or use the same threading and switch to the page that says Lace Threadings for treadling?
I do have a direct shaft loom of 4 shafts, so If she used the same threadings, I should be able to do this fairly easily, but Am confused what she means.

I think I understand that. Just a change in the pattern sequence. Back to the loom. Thank you.

I would like to upload an image relating to episode 2 but cannot fathom out how to do it. It used to be so simple. Any advice please
Thanks
Mary

Hi Mary, you can find a visual “helping hand” with loading images under the Resources tab at the top of the page. Or - for a quick link just click here https://help.schoolofweaving.tv/article/100-uploading-images We look forward to seeing your photos 😀

Hi Sandra
Thanks for your reply. Have tried to do this but with no success it seems. I think I’m probably being a bit dim.
Mary

OK - you'll probably see that I deleted a post prior to this response ;-) That was a successful photo of a flower I uploaded, since it wasn't relevant - I deleted it. However - I was successful. Drag and drop your photo into where it shows to you, then choose the option of "HTML full linked" - you should be able to copy the full code it creates in the box below. Take that code and post it where you want your photo to be on the Forum. The code will be loooong but if you click and copy it - it should capture it all and hopefully will work. I'll be watching to see if you have been successful.

Thank you for your help and patience Sandra. It was really easy when I realised what I was doing wrong . Let’s hope it was worth it!
Well the photos should show a tunic I have just made from the canvas weave sampler, it seemed a shame not to do something with all that fabric. The warp is a linen /cotton mix and the blue weft is linen. I added a length of plain weave to the end of the sampler throwing in random double picks. The plain weave was used to create the width needed for the front and back and the sleeves were each made from two pieces of the sampler . There was very little of the sampler left! I was really pleased withe way it turned out. 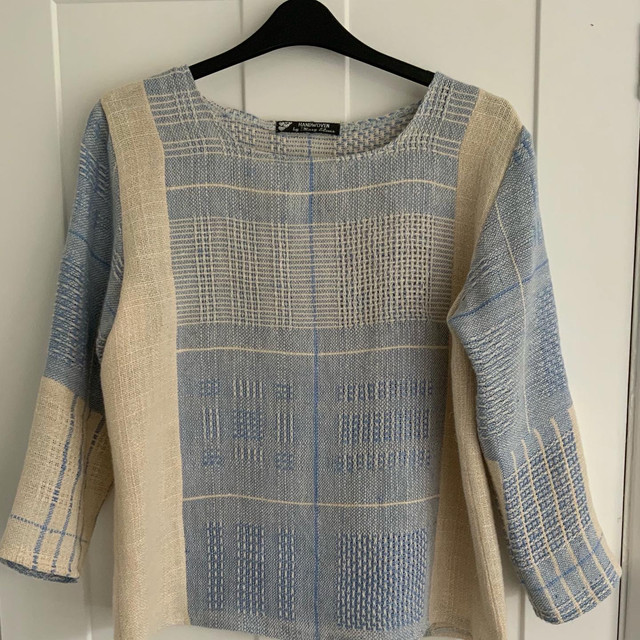 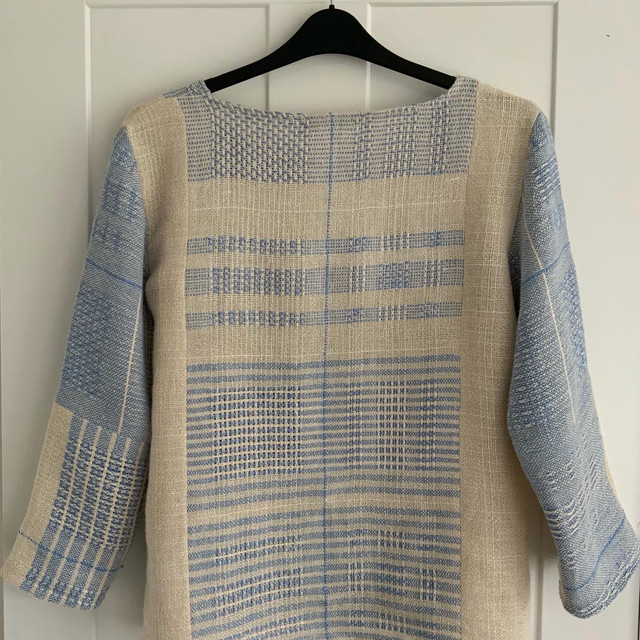 Oh My goodness Mary, that is stunning. What a wonderful top. I love the yellow fabric for the side panels and the lace is so beautiful.
I’m blown away. Congratulations and thank you so much for sharing. Xoxoxox Jane

Oh My goodness Mary, that is stunning. What a wonderful top. I love the yellow fabric for the side panels and the lace is so beautiful.
I’m blown away. Congratulations and thank you so much for sharing. Xoxoxox Jane

I'm sooo glad you were able to get your photos up so we could see your amazing top. Your use of your Canvas Weave sample is an inspiration to the rest of us - thank you so much for sharing!

Thank you Jane, Sandra and Lana for your kind comments. It is rather a special item as the sampler was the last piece of weaving that my husband saw before he passed away at the end of April. He was always keen to see what was on my David loom and encouraging me to go and play with my ‘toys’ as called them ( my looms and spinning wheels). So the tunic will always hold special memories.

Oh Mary, that makes it so very special. I am sorry for your loss :(
Sending you love and hugs.
xox

Mary, your tunic is lovely! Your use of the sampler is very clever and inspiring. Thanks for sharing.

I’ve just finished the canvas sampler- I love this structure so much! It is a lovely long runner on my dining room table. And thanks to Jane teaching how to read the fabric not just a piece of paper! Weaving is so much fun and satisfying. During this stressful time I am more than ever thankful to have found this online guild. BTW- I love Jane’s fashion style! Her jewelry and dresses are beautiful.